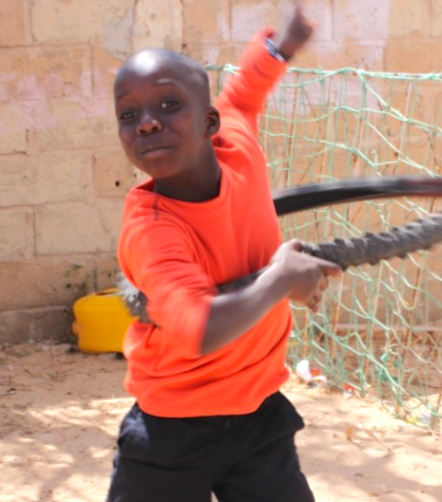 In Senegal, many children are given to Marabuts as a student (Talibé). Often they come to a profiteering Marabut and are forcefully forced to beg, or they flee to the street. 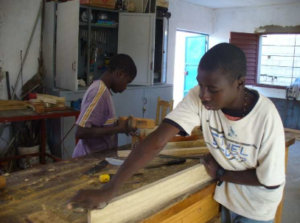 PERSPECTIVE SENEGAL offers escaped and abused Talibés a safe haven and a chance to live a normal life. In the training and residential center they learn to process their trauma and to develop confidence again. In addition to a basic education, they can follow a carpenter’s training, which opens up new perspectives for the future. The HELP CHILDREN FOUNDATION supports the creation of a day trip in Dakar to get more children off the road. 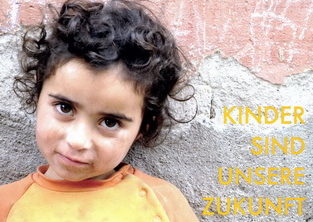 In war and crisis areas such as Syria or Turkey, the distribution of over 2,000 survivors’ pensions to children in need is annually one of the main pillars of foundations. Various educational projects and the targeted support of children’s children are further important projects of the international help of kids to life. The Help Children Foundation regularly supports the international projects of kids to life.

In Unterhaching near Munich, the Foundation’s 16,000 m² pedagogic center for children and youths is used by more than 20 social institutions with over 3,000 children a year. It has a children’s workshop, a petting zoo with a variety of animals, sports fields, a climbing garden and two overnight accommodation houses. 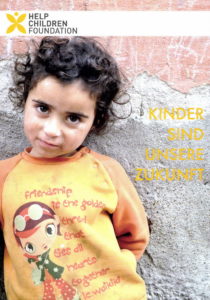 With the ever increasing number of children to be looked after, the foundation has come to its capacity limit. For this reason, the construction of a large kitchen has become indispensable in order to provide the children with meals. The Help Children Foundation also supports kids to life in this important project. In no other life stage is food as important as in childhood. In the first ten years they learn the nutritional behavior, which forms the basis for their lifelong eating habits.

At kids to life the children are not only well-cared for, but learn a lot about different ingredients and recipes in cookery and baking workshops and acquire basic knowledge about different types of preparation. In a very playful way, a respectful handling of food is also conveyed.

HELP!
DONATE FOR THIS PROJECT!

Make sense at the start of the year

The situation in the refugee camps has drastically changed. There is hardly any food to supply the children. For us, of course,
is inaccessible to the Syrian refugee children: bread, water, rice, blankets and clothing.

With a donation of 50 euros you help a child to overcome the harsh winter in Syria.

The Help Children Foundation supports the project “Survival packages for Syrian children in Allepo” from kids to live with your donations.

Thank you for your generous support.

The Help Children Foundation, together with the Anton Schrobenhauser Foundation kids to life, is planning a children’s day-care center for Syrian refugee children on the Turkish / Syrian border in Kilis. 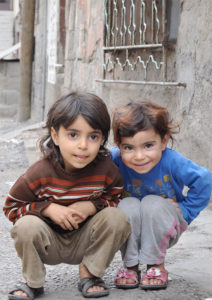 Already the fifth year the children suffer from violence and the disintegration of social and state structures. Millions of families with children are on the run and seek desperate shelter. According to Unicef, an estimated 3 million Syrian children had to stop their schooling since 2011. In the 2013/2014 school year, 70 per cent of the Syrian children living outside Camps did not attend school in the refugee country of Turkey. Many girls and boys are traumatized. In refugee camps and outside, they usually have no meaningful occupation.
In the worst case, millions of disillusioned children are growing, for whom hatred and violence are normality. The world community therefore warns that a “lost generation” will grow, which could contribute to the further division of Syrian society and the destabilization of the entire region.

There must be an urgent need to invest much more in education and help for self-help – and thus into the future of children and the entire region.

For this reason, we are investing together with kids to life in the future of Syrian children.

The earlier it is started to look after a traumatized child, the greater the chances of rehabilitation. Our concept envisages that the neglected children are already being educated in a toddler age.
In addition to the education and the playful learning, Help Children Foundation is very important to the daily hot meal, since these are mostly under-worked or malnourished.
We promote this project as sustainability is the first priority. With this help, these children get a real opportunity for their future. 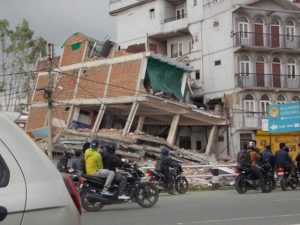 The forces of the MHW, which have been on the ground since May 1st, have come away with the horror yesterday. Again, the earth trembled and that was still very violent: with a strength of 7.2 on the Richter scale, the quake was measured with epicenter east of Kathmandu. Again, over one thousand injured and many dead are to be lamented. 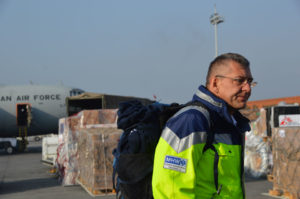 Head of Operations Josef Riener: “The situation for the survivors is dramatic. Hardly anyone is afraid of further aftershocks, even in the damaged houses. There are still many international helpers on the ground and the necessary reconstituted medical help in so-called health points works according to circumstances well. The lack of infrastructure is still problematic to reach remote mountain villages and the coming monsoon. For the rainy season many damaged houses have to be repaired and equipped with new roofs. For 100 € we are able to provide a roof of approx. 16 m² to a family! ”

On the basis of urgently needed help on the ground, the MHW will continue its deployment with ASB Styria until at least 23.05. to assist local helpers in the provision of health points and emergency shelters. The refurbishment of Orphan Welfare Home will continue. Urgently stable tents, tarpaulins and corrugated iron coverings are needed in order to equip the lodgings in a monsoon-friendly way. On site, the relevant materials are transported to the assigned emergency shelters in consultation with the Ministry of Health (MoHP).

Thanks for your support! 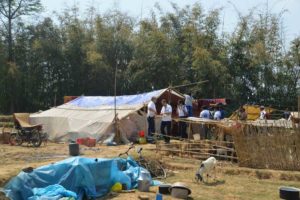 Since 1 May 2015, the 5-person team of the MHW has been deployed in Kathmandu and the surrounding regions. The earthquake has hitherto demanded about 8,000 deaths and more than 14,000 officially registered injured persons (a tendency to rise further). Over 100 aftershocks were recorded, including a tremor of 6.7. 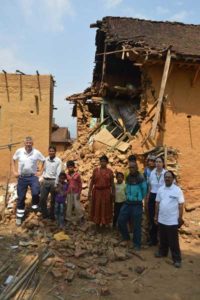 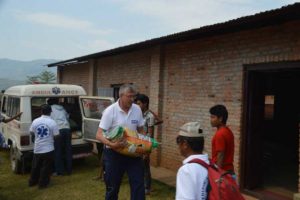 Since the arrival, the coordination team registered at the UN-OCHA and the Nepali Ministry of Health (MoHP) has been carrying out investigations into the disaster area, providing numerous injured people on site. 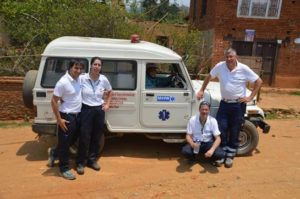 In talks with the official bodies and local organizations, it is confirmed that the supply of relief supplies is now mainly related to tents, food and drinking water. Support for reconstruction is also urgently needed. 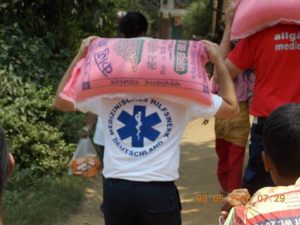 In the Phungstsok Choelling Monastery, which has been transformed into a temporary camp, the team supports daily the medical care of the injured (including numerous children). Apart from that, the medical assistance on site is normalized, with the main focus now being on the establishment of so-called health points. 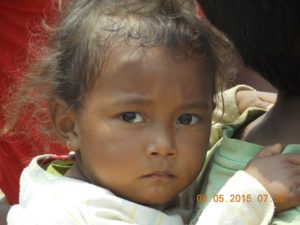 These are mobile health centers, where the persons concerned are, for example, Medicines can pick up or a wound care takes place. Also, a “home care system” for simple health problems, such as diabetes or fever is so secured. The MHW has the official order of MoHP to build such a health point in Panchkhal / Kavre (town with 22,000 inhabitants) and to operate with local forces. 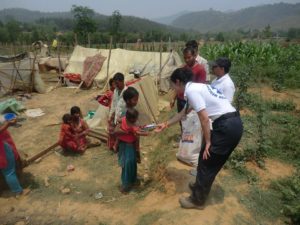 On May 7th, the MHW sent four more helpers to Nepal, in parallel to further projects. This includes an orphanage project in Kathmandu, which still serves as a BoO (Base of Operations) for our team. This has not been overthrown by the earthquake but is still heavily drawn. Parts must be repaired and electricity and water pipes are also damaged. 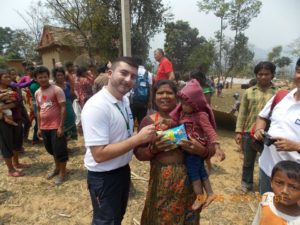 It is impressive how the staff of the orphanage can deal with this situation “positively” and “positively” in order to provide the children with a loving and secure home. Is a local relief organization (Orphan Welfare Home), which has a state recognition in Nepal.

There are 15 places for the children. At present, 12 children aged between 5 and 16 are cared for. There are two nannies in the house, so children from 2 years can be accommodated.

In addition to building the Health Point, the MHW will also support this orphanage. The goal is to increase the capacity and to give a home to five other orphans whose parents died in the earthquake in the short term. 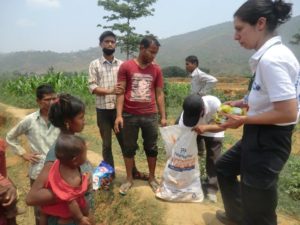 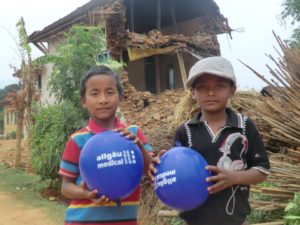 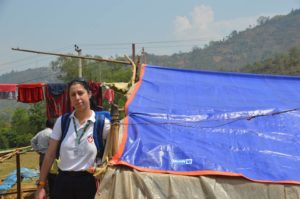 The Medical Disaster Relief Agency Germany is in use

According to the current situation report, the earthquake has so far claimed over 7,500 dead and more than 14,000 injured – over 100 aftershocks were recorded, including a tremor of 6.7.

The coordination team of the MHW has been conducting investigations in the disaster area at the UN-OCHA and the Nepalese Ministry of Health (MoHP) for 4 days, providing injured people on site. In talks with the official bodies and local organizations, it is confirmed that the supply of relief supplies is now mainly related to tents, food and drinking water. Support for reconstruction is also urgently needed. In the Phungstsok Choelling Monastery, which has been transformed into a temporary camp, the team supports daily the medical care of the injured (including numerous children). Otherwise, medical assistance in the country is about to normalize and go into the hands of the local health care system. The local structures are supported by the MHW.

Further planned procedure: Parts of the 5-member coordination team will be replaced on 09.05.2015. The mission is to explore further follow-up projects and orphanages. From May 6, 2015, a health care center in the Sunkhani region will be established by the MHW. Further assistance, e.g. Distribution of food and supplies are planned in consultation with local authorities.

The team is supported by the Arbeiter-Samariter-Bund (ASB) Styria and Luftfahrt ohne Grenzen e.V. from Frankfurt am Main.